Last summer I travelled around China for three weeks and I spent four days in Guilin, a city in the north part of the southern province of Guanxi. Apart from the average 35 degrees and the 100% humidity level that created a surreal ‘steamy’ atmosphere – I realised that I had never experienced proper heat before – Guilin is one of the best places that I visited in China. The city’s landscape is uniquely picturesque as it is located on the west bank of the Li River and surrounded by karst mountains covered by forest. The nature is truly incredible and the colours – especially the bright green of the mountains – are breath taking.

In addition to the landscape, something else particularly amazed me about Guilin: I had never seen so many people using tablets and smart phones before. Everyone, from 7 to 90 year old, was using them. People driving the innumerable motorbikes that literally flood the streets used them too – even when there were 3 or 4 passengers (instead of 2) on the same vehicle. Everyone seemed to be always connected … to something. This captured my attention in many occasions, especially considering that, although being populated by almost 5 million people, the city still functions as a large countryside village, at least in terms of its economic activities. There are industries that mainly process the local agricultural products, but visibly the majority of the urban population is employed in the fields outside the city-centre, – thousand of people enter and leave the city in the morning and at night carrying rice and vegetables –in small retail units in the local markets, and in the handicraft sector. Essentially, Guilin doesn’t look like other Chinese modern metropolis, but its urbanites are very much experiencing one big aspect of contemporary cities – the constant need to use technologies.

Despite Guilin’s urbanites being constantly connected to the Internet, they are thrilled every time they see a non-Chinese tourist. The main reason is that they want people from outside China to tell them stories, especially young women. Almost no one speaks English and I don’t speak Chinese: this made even the most basic conversation extremely difficult. Therefore, it was frustrating not being able to talk to local people. Nonetheless, one night I had a long conversation with a young woman that worked in a local teashop. She could speak very basic English, but the first thing she did in order to ask me more elaborate questions was to take out her smartphone and use it to translate from Chinese. We ‘talked’ for almost one hour by translating sentences on our phones and showing them to each other. Many things got lost in translation – especially my very specific questions about the city and her fellow citizens. She was very curious about my life and my interests – like any 20-year old would be when meeting someone new. In the end, what really surprised me was that she was used to talk to people using her phone, but given the number of smartphones and tablets that I had seen in the previous three days in Guilin – in the middle of China’s countryside – it actually does make sense that I got to meet someone that way.

Guilin is the only medium-size city that I visited in China, and I thought it was a surreal place for many reasons. People are not struggling to make a living, neither they live in indecent conditions. However, I could still feel contradictory sentiments walking in the streets and visiting the outside villages. Why do most of the people have expensive smart phones and tablets but circulate in unsafe and old motorbikes that barely work? Is this a reflection of a global shift in people’s priorities? While it is not surprising to see every single person using a smartphone on a train in London or Shanghai, it was surprising to me to see it in a city where most of the workers transport local fruits from the outside villages to the market pulling their products with their bikes and motorbikes. Most of all, to see the older generations being very familiar with new technologies, more than in any other place where I have been or lived. 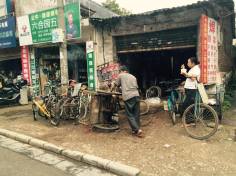 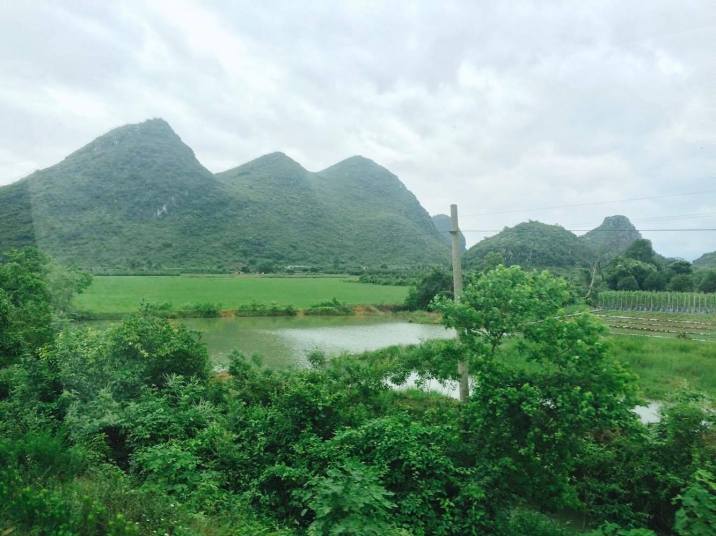 One thought on “Lost in Translation: four days in Guilin”